Back in primary school, our teacher (Mrs Bell) would go around the class at 9 AM, asking us to share interesting things that had happened to us since last time. This round-the-class summary was called ‘Our News”.

After everyone who had a story had told it, Mrs Bell would pick her favourite three items, they’d get a line each and we’d write ‘Our News’ for the day in the bottom half of a copybook. You could then draw a picture at the top, to illustrate your favorite story of the ones that had made it into print.

Not much has changed. I still go around my peers and colleagues in the mornings, get updates from the various classmates, pick the stories I like the most and put them on the blog, with pictures of my choosing, or making.

It’s fun to know that ‘Our News’ would still give me immeasurable pleasure almost forty years later, but there you go; life can be crazy like that. So: 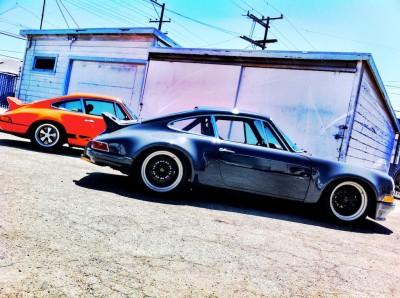 Today is Sunday. It is a sunny day.

The weather last night turned cold and rainy, so John, Hayden, Harvey and Alastair went to the Sports Bar at the Monterey Hyatt, and had a few beers while watching the Brumos Porsche win at Virginia Raceway, after a thrilling wet race and some very close racing.

Yesterday, Jamie and John shot three Porsche 911: two hot rods and a beautiful standard 911S. One was shot at Lover’s Point in Pacific Grove, and the other two were on The Preserve, a privately owned 20,000-acre ranch outside of Carmel.

John and Jamie have been doing their usual sun cream forgetting trick, so John is now pinker than a Barbie car.

(I’m sure that last one was also in ‘Our News’ forty years ago, too.)