One big problem with the Porsche Boxster is caused by its defining feature: that convertible roof.  The soft top needs regular maintenance, just like the rest of the car. 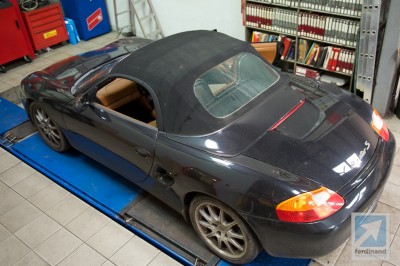 Even in the UK’s water-dominated climate, a Boxster’s convertible roof sees regular use and is exposed to plenty of stress. Controlled by a series of cables, over time these cables can slip out of adjustment: the tell-tale being a rattling sound behind the driver. If the roof cables are left unadjusted, the mechanism invariably starts to malfunction.

This would not be such a serious issue, except that if the roof is left without attention for a prolonged length of time, the drain tubes for the hood box that the roof folds into can get blocked by dirt and debris. The roof box then fills with water, which usually enters the car directly overhead electrical control boxes situated in the left rear floor. 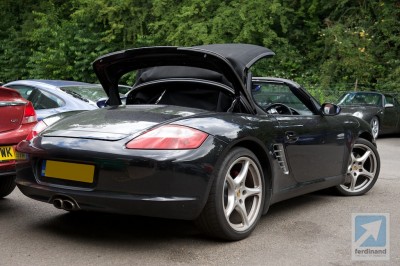 The Boxster above had a lucky escape. When the car started leaking water, the owner brought it in for a look. The water had entered the car due to blocked roof drains, but only on the right side, missing the expensive control boxes (phew). The roof box was checked and the problem was found. A pop-on ball connector for a hood cable had fractured and – as the perfect size and shape – dropped into a drain tube and blocked it.

This was the first such hood box blockage I have seen, where the ball connector caused the problem, but where there’s one failure, there are many more like it waiting to happen! When servicing your Boxster, have that hood adjusted and lubricated, and make sure the garage checks the drain tubes. It could save a fortune in the long run.