Not reported on my Cayenne for a little while, so that is worth an update. It’s been a busy bus and not had much love since fitting the new propshaft in September. You might remember that I bought a recon shaft and that was not right so had to send it back, then bought a new one and that had a small vibration when I fitted it.

My plan was to refit that second one using a Porsche propshaft alignment tool and then have my original shaft reconditioned by some old-school guys in Nottingham and fit that to sort it once and for all. A great plan and so far I have managed to achieve none of it! Busy, busy, busy: it may happen over Christmas.

Minor vibration notwithstanding, the Cayenne trucks on regardless. I had to top up the coolant by quite a lot for the first time in months the other day, so I guess I have a leak. As the Cayenne is approaching 140k miles, it could be water pump or could be rad wearing out. The centre coolant pipes in the V8 have been changed to aluminium, so unlikely to be that. I’ll look at it when it’s next on a lift.

It being winter, the starter has gone sluggish again, rarely starting first time from cold. I have another starter to recon and fit, but that’s another project not sorted yet. I did manage to swap the worn-out summer tyres for nice set of part-worn Pirelli Scorpion winter tyres on 19″ wheels. I like the look on the original Cayenne wheels, and the early 19s are wider than later rims. Not convinced about ultimate grip of the Scorpions but a: they are better than nothing and b: they are on the car now so we will wear them out. I’ll wash the truck when I change back to summer tyres. 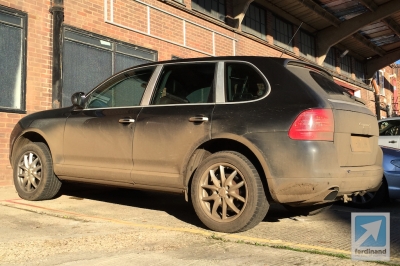 Swapping the wheels gave me a chance to to check the brakes: still looking good after plenty of miles. A big tick for lifespan of Mintex discs and pads for Cayenne. Things that will not last much longer include the rear light units – will have to replace the offside one soon as it has now started filling up with water over time. Resealing the unit made no real difference, so I drilled a few small holes in the base to let water escape. It’s had condensation problems since the day I bought it, which is common on Cayennes and very annoying.

A change to new Philips X-treme headlamp bulbs brought a lot of irate drivers on a high-speed thrash up the A34 from Portsmouth one evening. Coming up behind people quickly with my headlamps on dipped beam, the Philips pattern was obviously dazzling the car in front, but turning the headlamp beam height adjuster had zero effect on angle. Took the lamps apart the following day to find neither adjuster was working internally, so I am looking for headlamps now also: new ones are mega expensive. 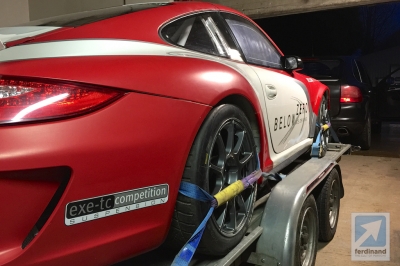 Having recently used the Big Pig to tow Tuthill’s 997 R-GT rally car to a PCGB GT3 Register open day, a good friend asked me this morning what he should be paying for a used Porsche Cayenne, to do a bit of towing and usual mix of everyday work stuff. I have to confess, I pointed him towards a Landcruiser instead. He may still buy a Cayenne, but it won’t be on my say-so.

You’ll pay a bit extra up front for the Landcruiser (a proper 4.2 TD Landcruiser that is, not a 3.0 Colorado or whatever), but it comes with better reliability, better economy and better residual values. You don’t get quite as much personality, but personality is well down the list when a truck can’t hold itself together at 140k miles: small beans for a working machine. That said, I have a Landcruiser in the garage, and no plans to sell the Cayenne, so what the heck do I know! 😀