Had a nice email from Raleigh up in Utah, who thanked me for pointing him towards Impact Bumpers (you’re welcome mate) and shared some pics of this very smart 1984 Porsche 911 3.2 Carrera Coupe in rare Ruby Red. With just two owners and low mileage from new, it’s the antithesis of yesterday’s Targa Speedster feature car. 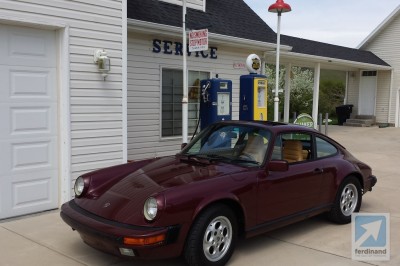 New Porsche CEO, Peter Schutz, saw that enthusiasts were not ready to abandon Stuttgart’s rear-engined sports car. Schutz reversed the 911’s sentence, and gave orders to restart product development. In 1981 there was had a power hike for the SC, then another in 1983 (RoW) and then a displacement increase and fuel injection system change for the new model 911 3.2 Carrera in 1984.

“The decision to keep the 911 occurred in the office of (engineering chief) Helmuth Bott, when I noticed a chart on the wall,” recalled Schutz. “It showed the ongoing development schedules for the Porsche 911, 928 and 944. Two of them stretched far into the future, but the 911 line stopped at the end of 1981. I walked to the chart, took a black marker pen, and extended the 911 line clean off the chart. I’m sure I heard a silent cheer from Bott.”

Bott went on to father the 959, and the work his engineering team did on the Carrera paid off handsomely, as the new 911 sold in record numbers. Bosch Motronic was a clear step up from the earlier CIS or K-Jet system used on the 911SC (and every other contemporary Porsche), giving better efficiency. While the bigger displacement came via a longer and lazier stroke, the increased capacity and better intake system gave more headline horsepower: quite a marked jump for US enthusiasts. More power, more prestige, more sales.

One man keen to sign up for the 3.2 Carrera was Raleigh’s father-in-law, who ordered this 911 brand new in 1983, and had it delivered that Christmas. Those early 3.2 seats are still as 911SC: most early 3.2 trim shows no change from previous. Teledial wheels were Carrera additions and are rare items now: sunroof and air con is not super common outside the US. 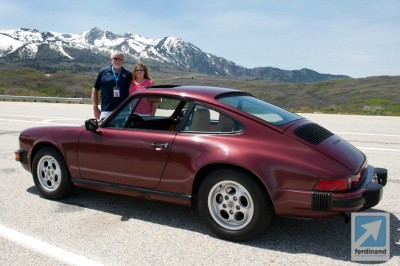 The classic Carrera has covered just 41,000 miles and looks in superb condition. Raleigh took over the 911’s upkeep one year ago, and reports the only change to standard as an updated radio – literally nice to hear. Good job, Utah Porsche guys: this 3.2 is a cutie.