Three hours into the first race of the 2014 IMSA Tudor United Sportscar series, the works Porsche 911 RSRs are on full pest control duty at Daytona 24. Briefly running P1 in GTLM, Patrick Pilet’s now closing on that pesky Viper from P2 in number 911, with Michael Christensen P3 in RSR 912. 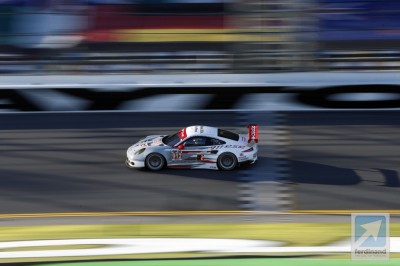 The GTD 911s have come good on race pace, with three 991s in the top four. Connor de Phillippi holds a strong P2 in the number 73 Park Place car. Though Flying Lizard’s Spencer Pumpelly is the fastest man in class so far on a 1:48 (Audi R8), the 911s seem happier to run in the sub-1:50s than the rest of the field, lead 458 Italia excepted.

On top of all this, WEVO Hayden is also working at Daytona this year, engineering the number 57 Krohn Ferrari , shared by our mate Peter Dumbreck. Peter had never seen Daytona before this weekend, but still managed to post a time acceptable to get through to qualifying and the car looks balanced on track.

With almost a day left to race, we’re in with a good shout at this one. Forza RSRs: keep pushing, boys!

Edit: just as I published this, the race went full course red following a heavy shunt for Memo Gidley. Looks nasty – hope he gets out of it.