Porsche has finally unveiled the new 911 RSR. Debuting at the Los Angeles Motor Show, the new 911 race car will make a few more public appearances before its racing debut at Daytona in January. The new RSR will be seen at nineteen events during the 2017 season, with two works entries each for the WEC GT and IMSA championships. 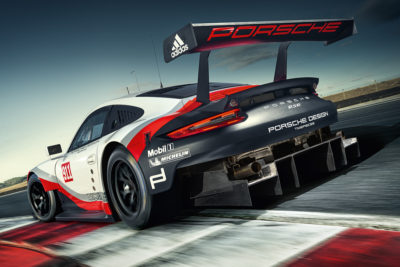 Built “to the full breadth of the Le Mans 24 Hours GT regulations”, the new RSR runs a 991-derived four litre, 510 horsepower flat six in a mid-engine layout. This fundamental change to the 911 concept has allowed the designers to run a mahoosive rear diffuser working with a huge rear wing, designed using lessons learned on the 919 LMP1 car. This makes the RSR much more efficient.

“This is the biggest evolution by now in the history of our top GT model,” said Dr. Frank-Steffen Walliser. “For the 911 RSR, we deliberately focused on a particularly modern and light normally-aspirated engine, as this gave our engineers immense latitude in developing the vehicle. Apart from that, in principle, the LM-GTE regulations stipulate the absolute equality of various drive concepts, as the torque characteristics of turbo and normally aspirated engines are aligned.”

Interestingly, Weissach has gone with what it says is a new safety cage concept and a new, rigidly-mounted racing seat. With the seat fixed to the chassis, the pedals are moved and adjusted to fit each driver. Also fitted is a collision avoidance system, which warns the drivers of incoming LMP cars. The dashboard looks utterly mental – good luck to the drivers of this one.

The new RSR made its track debut in March 2016 and has since covered more than 35,000 kilometres in testing across Europe and North America. All that testing has given Porsche plenty of time to design a photogenic livery (including PD logo and Porsche Design mentions) for the one-and-a-quarter tonne racecar, but all we want to know is: can it kick arse? And who’s going to drive it in WEC? All will be revealed.