Tomorrow is the Gooding & Co auction sale in Amelia Island, where noted Porsche collector, Jerry Seinfeld, is selling a number of his cars. Eighteen soon-to-be ex-Seinfeld cars including sixteen Porsche models will cross the auction block in this huge sale, which has just twenty-nine Porsches entered in total.

Talking to an American collector friend, this batch of cars is estimated to be circa ten percent of the complete Seinfeld collection. The famous comedian buys and sells many cars – I’ve driven some ex-Seinfeld machinery myself – but most previous sales have been well and truly under the radar. Dealers entrusted with Jerry’s cars who have tried to cash in on the Seinfeld kudos as part of their pitch have allegedly not had an easy ride afterwards, so it is no great surprise that an auction was chosen to dispose of this sizeable tranche, or that Gooding got the commission: the famous Amelia Island sale is the premier East Coast auction in the US and comes just as the market starts to gather pace following the lulls of winter. Many record Porsche prices have been achieved by Gooding at this sale.

“The reason I wanted to bid these cars farewell in this way is really just to see the look of excitement on the faces of the next owners, who I know will be out of their minds with joy that they are going to get to experience them,” says Jerry. “Each one of these cars is a pinnacle of mechanical culture to me. Many are the best examples that exist in the world. I’ve loved being entrusted with their care, and I’m proud of the level to which we have brought each and every one of these wonderful machines. Honestly, if I had unlimited time, space and attention span I would never sell one of them.”

Situated in the north-east corner of Florida just inside the Georgia border, the almost perfectly named Fernandina Beach is finely dressed in Southern Victorian architecture and lined with more than thirteen miles of beaches. It’s a great escape for the rich and famous, but there will be no escaping market forces when twenty of Seinfeld’s own Porsche cars cross the podium from 11am tomorrow.

Prices at the very top end of the classic Porsche market have tailed off in recent months – at least for the cars you see at open sale. Sellers claim that many deals are done behind closed doors for stronger prices than seen in public, but even in these secret deals for the very best cars, buyers are applying pressure. Twenty percent off a $5 million car is a sizeable discount, so if the market is showing obvious softness, and both parties know it, there’s a poker game happening.

Doing eighteen poker deals behind closed doors, most likely through middle men, would be a long and expensive pain in the arse for Herr Seinfeld. Sending these cars to auction, with ten weeks of everywhere promotion, and a glitzy end-of-sale in prospect for Jerry, looking at the faces of buyers set to be “out of their minds with joy” is a reasonable recipe for respite from a high-end Porsche market that has consistently failed to deliver record-breaking prices since the middle of last year. 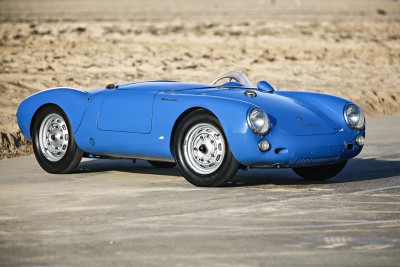 Seinfeld’s big hitters – the 550 Spyder, 718 RSK, and 917/30 – will fetch what they fetch and add to the existing market trend info, but more interesting will be the market for the Carrera GT prototype. Bought by Seinfeld directly from Porsche, and disabled before purchase from any possibility of being driven, this handmade CGT prototype has never been previously offered to the market. For some, it may be a potential jewel in the crown of a water-cooled Porsche collection, for others it is a pricey handmade paperweight. If any car were to illustrate prevailing price sentiment amongst serious Porsche collectors, then this should be it. 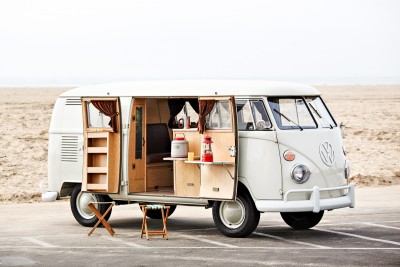 My favourites in the big Seinfeld sell-off are the Volkswagens: a 1964 Volkswagen Camper with less than 20k miles in simply perfect condition and a beautiful 1960 VW Beetle in original, unrestored condition, with just 15,500 miles on the clock. Of all these cars for sale, why sell this one? Assuming America turns out for Amelia, a top estimate of $55k on the Beetle could prove significantly behind the market. I would be keeping this car: it would be the last car I’d sell. Which means that Seinfeld has even nicer Beetles. Lucky man.

All images copyright and courtesy of Gooding & Company. 550 Photo by Mathieu Heurtault. Other photos by Brian Henniker.