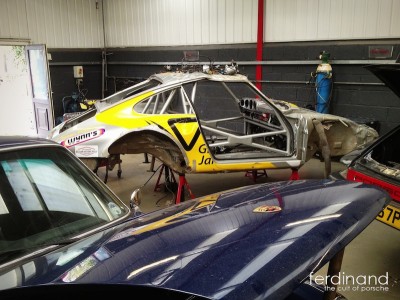 Rallying the opening event of the season at Haspengouw, Glenn had just shifted into fifth gear around a right-hand bend when a hint of oversteer escalated into something bigger, leading to a series of barrel rolls at very high speed.

The landscape surrounding the crash was ploughed fields in usual Belgian style, but the ground was frozen solid. Imagine crashing on rutted concrete and you get the idea. This video shows the damage suffered, and also shows the guys walking away: the only happy news for Janssens fans from this event.

Tuthills have been building rally cars for over thirty years and crashes are part of the world they live in: I’ve got plenty of crash damage pics from the workshops over the seven years we’ve been working together.

It’s never pleasant to see a car bent and broken, but it’s always very satisfying to see a Tuthill Porsche roll cage work as intended. This won’t be an easy repair but I’ll keep you up to date with the rebuild as it unfolds.